Authored by Mike Shedlock via MishTalk.com,

Please consider snags in the oil price cap negotiations between the US and various countries in the EU. 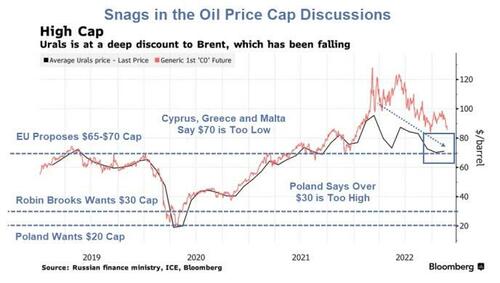 The EU’s executive arm proposed a level of $65 a barrel, which Poland and the Baltic nations rejected as being too generous to Moscow, the people said. But several countries with major shipping industries, including Greece, don’t want to go below $70, the upper end of the range put forward by the EU earlier Wednesday.

$70 is about where Russian oil known as Urals trades right now.

Representatives of the EU's 27 governments met in Brussels to discuss a G7 proposal to set the price cap in the range of $65-$70 per barrel, but the level proved too low for some and too high for others.

Poland, Lithuania and Estonia believe the $65-$70 per barrel would leave Russia with too high a profit, since production costs are around $20 per barrel.

Cyprus, Greece and Malta - countries with big shipping industries that stand to lose the most if Russian oil cargos are obstructed - think the cap is too low and demand compensation for the loss of business or more time to adjust.

The kicker is amusing: "EU diplomats said most EU countries, with G7 members France and Germany taking the lead, were supportive of the price cap, worried only about the ability to enforce it."

This brings us back to how any economist can possibly think such a cap might work.

You are totally out of your mind if you think a $30 price cap could work.
Why not cap the price of everything and end inflation?
That's how absurd your proposal is. https://t.co/pk7NaUtGlm

For further discussion of the obvious that many economists refuse to see, please consider the Carnegie article  The Flaw in the Plan to Cap Russian Oil Prices

Whenever countries on sanctions lists face difficulties in selling their natural resources, creative minds will find a way to thwart the proposed measures with help from companies prepared to turn a blind eye to the shady elements of ostensibly legal transactions. Oil shipments could be bundled with some symbolic but pricey services, such as customs services, laboratory analysis, or document translation. Another scheme would involve loading a supposedly full 80,000-ton oil tanker with only 50,000 barrels of oil, bringing the cargo price per barrel closer to the market price.

Such schemes would, of course, require some collusion on the part of intermediary countries, but that is unlikely to be a problem.  In recent months, Malaysia’s oil exports to China have exceeded the country’s actual oil production by one-third. Malaysia also cooperates with Iran and Venezuela in contravention of sanctions regimes.

Paradoxically, Russia may get some help from the OPEC countries here. For them, an emerging buyers’ cartel risks potentially manipulating the entire oil market and its prices. If the cartel succeeds in forcing Russia to obey its rules, the Arab countries may be next. If Russia counters the price cap by reducing its output, therefore, Saudi Arabia may be reluctant to increase its oil exports to compensate for the reduction, whether it has sufficient available production capacity or not.

Finally, the jury is still out on whether India and China, the biggest new buyers of Russian oil, are prepared to join the price cap coalition.

The aim of the plan, which was pushed hard by Treasury Secretary Janet Yellen, is to crimp Russian energy exports revenue while avoiding a surge in oil prices when a European embargo on Russian oil imports kicks in early next month. Despite European reluctance at the time, the G-7 first agreed on setting the oil price cap in June following Russia’s Feb. 24 invasion of Ukraine.

Aim of the Plan

It's quite amazing that anyone thinks the plan can possibly work, but president Biden, the EU, Janet Yellen and even prominent economists think the cap is a good idea.

Q: Why not cap the price of everything and end inflation?

A: Figure it out.

Q: Is it possible a cap might seem to work?

A: Yes. If the cap is set high enough it will be meaningless.

And if by some lucky fate a cap is set where the direction of oil is headed anyway, then the economic illiterates will be hooting and cheering their alleged success.


China, India and other countries will not go along. That's enough right there to show the ridiculousness of the idea.

Countries in the EU have an incentive to cheat.

One of Two Things


The cap will fail and do nothing.

The cap fail spectacularly and drive up the price by re-routing oil headed to the EU to China and India instead. Then the EU will have to get oil from the US or OPEC over longer routes increasing the cost.

The above two points are in isolation. But things should not be viewed in isolation. Given a pending global recession, oil prices are likely to drop anyway.

If they do, then as noted above, the economic illiterates will be hooting and cheering the alleged success of caps.

That third bullet point is from June 27.

The US and EU have been struggling since then trying to get agreement on price caps. The bloc still needs approval from all 27 nations on a precise cap.

Many of the above points were also in my November 22 post Under Pressure From the US, EU Agrees to Cap the Price of Russian Oil.

The struggle to get agreement stems from the impossibility of the goal to not eat Russian cake while eating Russian cake.

That alone tells you the plan is doomed.

Reiterating my November 22 comment, this cap idea is so stupid that only economists and politicians are dumb enough to believe it can work. Fifa World Cup: Neymar ruled out at least for...