Reuters is being widely mocked for publishing an article Monday morning which is headlined, Ukraine says it has repelled Russian incursion in Sumy region - given it is accompanied with the below photograph. The photo tweeted by Reuters naturally created some confusion, to put it lightly.


The report filed from Kyiv is introduced with the lines, "Ukrainian border guards repelled an incursion by a Russian sabotage and reconnaissance group in the northeastern region of Sumy on Monday, the governor of the Sumy region said."

The photo and tweet stayed live for hours throughout the morning, even as social media users expressed in hundreds of comments (and counting) that this demonstrates why it it remains hard to trust mainstream media reporting on complex foreign conflicts, especially Ukraine. Reuters did attempt to clarify in a caption with the photo that it shows "Members of the territorial defense force" attending "training". 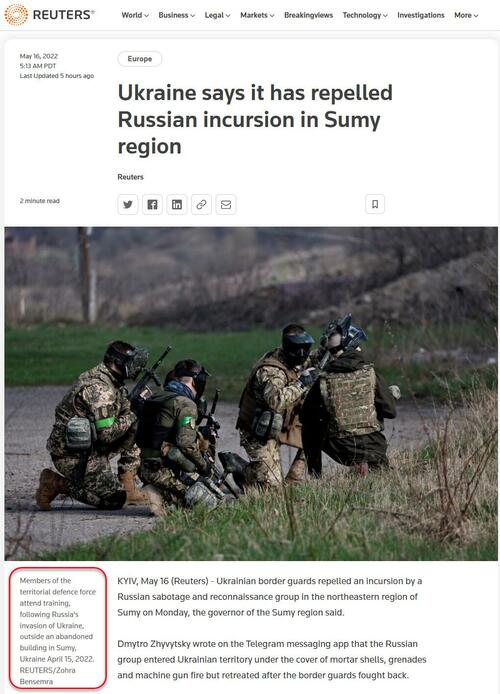 However, the avalanche of comments was triggered by the fact that the Reuters tweet itself was accompanied by no clarifying context.

Some have also noted that given the 'fog of war' already makes it obviously very difficult to ascertain precisely what's happening with the rapidly developing battlefield situation from day to day, the choice to feature Ukrainian troops paintballing is but the latest in a series of mainstream media fails. Throughout the conflict, big claims have often been made - captured in headlines - but typically with little in the way of actual evidence. "Ukraine claims..." "Russia claims..." "US officials claim..." are the types of introductions that have become commonplace.


Typically Ukrainian forces are quite open about showing off their US-supplied military hardware, and in particular the Raytheon and Lockheed Martin produced FGM-148 Javelin anti-tank missile system. These have flooded the battlefield, and have had devastating effect on Russian tanks and armored vehicle convoys.

But the paintball pic has elicited sarcastic comments suggesting that maybe it's the paintball industry's turn to make a pile of cash off the conflict...

This war is being manipulated by Big Paintball https://t.co/QTbUOggSGL


Untrusting observers are also questioning the $40 billion in Ukraine aid that the Senate is expected to again vote on Wednesday at a moment it is being hotly debated following Sen. Rand Paul last week blocking an initial hasty vote.

Glad they received the shipment of TIPPMENN 98’s and CO2 canisters from the US Taxpayers. https://t.co/pVeQHP3PYZ


"Maybe Ukrainians really do need the $40 billion if they’re fighting the Russian army with paintball guns?" one Twitter user asked. "And Reuters wonders why nobody trusts legacy media anymore."

How timing your meals right can benefit your...