Annexation polls have closed Tuesday in four occupied regions of Ukraine, after five days of voting on whether or not citizens in these territories wish to join the Russian Federation. Marking the occasion, President Vladimir Putin said in a televised meeting with officials: "Saving people in the territories where this referendum is taking place... is the focus of the attention of our entire society and of the entire country."

Russia's state RT has announced partial results late in the evening (local time) showing a huge majority in both the breakaway Donetsk and Lugansk People’s Republics (DPR and LPR) supporting uniting with the Russian Federation. "In DPR, more than 98% of voters supported the idea to join Russia, according to early official figures. The referendum in LPR yielded a similar result, with more than 97% of voters supporting the potential reunification. In Lugansk, all the ballots have been already counted, according to local authorities, while Donetsk, so far, has processed just over a half of votes."

And on initial results from Zaporizhzhia, Russian's English language broadcaster reports, "Residents of the Zaporozhye region in Ukraine, which is partially controlled by Moscow, have elected to break away from the country and join the Russian Federation. More than 93% of voters have supported the idea to split from Ukraine and join Russia, official figures show after all the ballots have been counted." 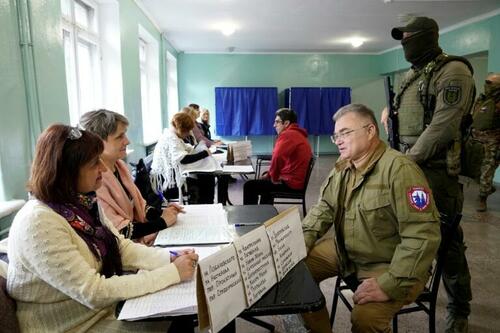 The Ukrainian government and its Western backers have denounced the referendums as a "sham" - given it's happening in the middle of a war and occupation. Yet other observers have noted these are all historically Russian-speaking regions, and that even without the Russian invasion a strong pro-Moscow showing would be likely.

The votes were held starting late last week through the weekend in self-declared republics of Donetsk and Luhansk, and in Kherson and Zaporizhzhia - despite Russian forces not currently being in control of every part of these territorial regions.

Not only has Kyiv vowed not to recognize any declared "independence" of these oblasts, it has even threatened lengthy prison sentences for any Ukrainian who organizes referenda or individuals who participate in the voting.

Meanwhile Russia's RIA said of voting across the occupied territories: First partial voting results from Russian-occupied parts of four regions of Ukraine show majorities of at least 96% in favor of becoming part of Russia.

Zelenskyy said at a #UN Security Council meeting that if #Russia recognizes the results of the "referendums," then he and Putin have nothing more to talk about. pic.twitter.com/AMwTRXVscu


The Kremlin has announced a major Putin speech set for Friday, and it's believed the Russian leader will use the occasion to declare the Ukrainian territories now part of Russia. This will mean close to 20% of Ukraine's geographic territory will be claimed as under the Russian state.