The state medias of Russia and North Korea are reporting that leaders Vladimir Putin and Kim Jong Un have communicated mutual messages pledging deeper ties between the two nations, at a moment both find themselves heavily sanctioned by the United States and its allies.

The pledge came in the form of an exchange of official diplomatic notes in which Putin wished Kim "good health and success" - and spelled out a desire for closer cooperation, coming at a key moment where Moscow has been on the offensive in trying to strengthen strategic alliances with non-Western countries, notably China and India also among them, as the Ukraine invasion has blown past six months. 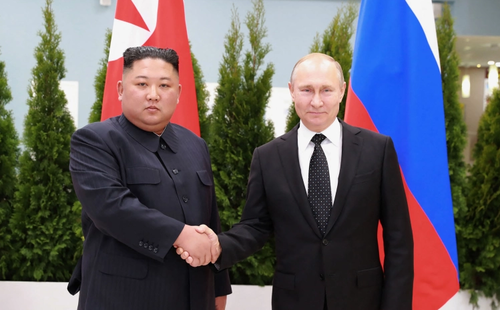 A 2019 visit between the two leaders, KCNA via KNS/AFP

Putin's message to Kim further expressed hope that deepened Moscow-Pyongyang ties "would entirely conform with the interests of the peoples of the two countries," according to a translation.

Kim, responded by highlighting the special friendship has led to...

"The strategic and tactical cooperation, support, and solidarity between the two countries have put on a new high stage in the common front for frustrating the hostile forces’ military threat and provocation, and high-handed and arbitrary practices," Kim wrote, according to KCNA.

Without doubt, Kim's reference to "hostile forces" has Washington in mind as topping the list. Starting in March as the Ukraine war continued to intensify following the Putin-ordered Feb.24 invasion, Russia became the "world's most sanctioned country" - even surpassing Iran and North Korea.

Currently, there's a European push - also based on repeat requests by Ukrainian President Volodymyr Zelensky - to have Western countries designate Russia a "state sponsor of terror" - which would require sanctions to be ratcheted even further, and the severing of Russia's participation in additional international institutions (such as cooperative anti-crime agencies like Interpol).

Moscow has signaled that such a move by Washington would effectively mean the end of diplomatic relations altogether, as Rabobank explains:

Russia - which is deepening ties with North Korea and Iran (whom the West wants to get closer to again) - warns that if it is designated as a being a state sponsor of terrorism it will mean the complete end of diplomatic relations with the US.

Here Is What Warren Buffett Bought And Sold In Q2

The FBI Is Now The Federal Bureau Of Intimidation