Authored by Kyle Anzalone & Connor Freeman via The Libertarian Institute,

During remarks on Wednesday, the civilian head of the North Atlantic Treaty Organization (NATO) slammed China as a "challenge" to the alliance. In an interview with Reuters, Secretary-General Jens Stoltenberg said Beijing’s support for the war in Ukraine, its opposition to NATO expansion, and its territorial claims justify the alliance assigning China this label.

Largely in response to Washington’s increasing hostility, Moscow and Beijing have strengthened their ties for well over a decade. Prior to the invasion of Ukraine, China and Russia carried out several rounds of military exercises. Russian President Vladimir Putin and Chinese President Xi Jinping have met several times since the war began, reaffirming the two Asian powers’ growing ties.

While Beijing has not given public support to Moscow’s war, China has refused several demands to condemn Russia’s invasion. Beijing has drastically increased its economic ties with Moscow as Russia has become more isolated from Western markets. 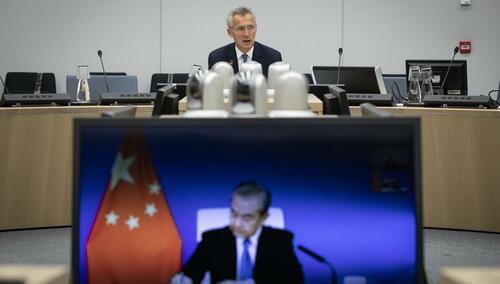 After Moscow’s invasion of Ukraine, Washington leveled massive sanctions on Russia and many NATO member states agreed to scale back Russian energy purchases. The intention was to crush the Russian economy and disable the Kremlin’s war machine.

However, the Western economic war on Russia caused energy prices to spike, allowing Moscow to replace the shrinking European market with Asian customers. While Russian oil is selling below market rates, Moscow’s increased exports to China, India and Turkey pushed the rouble to seven-year highs this summer.

“The sum of all is this just increases the importance of NATO allies standing together and realizing that China is part of the security challenges we need to face today and in the future,” Stoltenberg said in the interview with Reuters.

Meanwhile, India and Turkey have followed Beijing in importing more Russian goods. Ankara is a NATO member state. The US and several other NATO members recently engaged in war games with India.

Stoltenberg also took issue with Beijing over its opposition to NATO expansion. At the fall of the USSR in 1990, the North Atlantic alliance only had 16 members. In the 30 years since, NATO has added 14, soon to be 16, new members. Many of the new additions to the alliance are former Warsaw Pact or USSR states. Moscow has long protested NATO expansion. In 2008, the US Ambassador to Russia said expanding the alliance to Ukraine and Georgia violated all of Russia’s red lines. NATO has also expanded its global reach.