Meta has said it disrupted a Chinese operation to try and influence the coming U.S. midterm elections.

The company said it dismantled the campaign, which "targeted users in the United States with political content in an apparent effort to polarize voters", according to reporting by The Epoch Times.

The report says that China maintained fake accounts across both Facebook and Instagram - and also Twitter. The influence campaign began in November 2021 but didn't gain any engagement, the report says.

The discovery "suggests a shift toward more direct interference in U.S. domestic politics from China", the report reads.

Meta global threat intelligence lead Ben Nimmo commented: “The Chinese operations we’ve taken down before talked primarily about America to the world, primarily in South Asia, not to Americans about themselves. Essentially the message was ‘America bad, China good.” 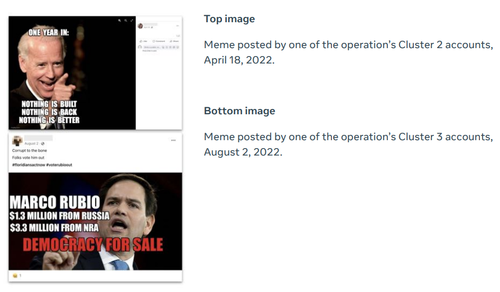 The operation targeted both the left and the right in the U.S., and ultimately sought to sow division on hotbutton issues like abortion and the war in Ukraine.

One cluster of accounts posted memes that accused President Biden of corruption, while others posted critiques of the Republican Party for its stance on similar issues.

All told, the operation wasn't extremely sophisticated, the report says. In addition to failing to garner much engagement, some accounts posted in Chinese, while others used photographs of men on accounts with womens' names.

Meta has said it doesn't have enough evidence to say who, exactly in China, was behind the campaign.