Things have again escalated in the ongoing Russia-Ukraine-NATO standoff, with Kiev authorities and The Washington Post reporting Friday that hackers have launched a massive cyber-attack on Ukrainian government websites. Anyone logging into the sites were given a warning with the words "expect the worst".

Authorities identified "more than five" government sites targeted in the hack by unknown entities. But later a formal statement by deputy head of Ukraine’s state agency of special communication and information protection, Viktor Zhora, described that in total "close to 70" federal and local Ukrainian agencies saw their websites breached in recent weeks.

Despite an ongoing investigation to uncover the identity of the hackers, naturally WaPo and national security pundits have quickly pointed the finger at Russia. 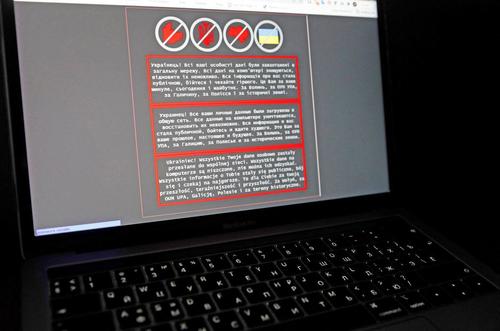 "Just hours before the attacks, Dmitri Alperovitch, an expert on cybersecurity and co-founder of CrowdStrike, a leading firm in the field, told a Washington Post Live discussion that Ukraine had already been subjected to increased cyberattacks, which he said could be a prelude to an invasion."

On Friday morning, Ukraine’s Foreign Ministry and Ministry of Education and Science posted on social media that their sites were down, and local media reported that the country’s main government website, the Emergency Situations Ministry and the Ministry of Veterans Affairs were also affected.

Visitors to some Ukrainian government sites were greeted with a message — written in Ukrainian, Russian and Polish — telling them that their personal data had been “uploaded to the public network” and “destroyed.”

“All information about you has become public, be afraid and expect the worst,” the message said. “This is for your past, present and future.”

Authorities were quick to reassure the public that none of their data has actually been leaked or breached.

Concerning Friday's revelation of the large-scale hack of some 70 Ukrainian government sites, the timing is interesting, given it appears at least 60 of these breaches actually reached back into December, but which are being announced now in association with the new hacks of government sites, perhaps in order to further hype the severity of the threat.

This also as on Friday both Russian and NATO officials have admitted this week's series of talks which are intended to deescalate the situation appear to be at a "dead end".

At the same time, a broader narrative and accusations are emerging now...

LATEST: US believes Russians prepping potential sabotage operations against their own forces, and fabricating provocations in social media, to justify Ukraine invasion.
But US officials have no attribution yet for worst cyber attack on Ukraine in 4 years.https://t.co/MlyrOGaWG7