Sanctions on diamonds coming out of Russia have sent the industry into a "panic" , with traders reportedly working to try and figure out end-arounds to continue accessing one of the world's best sources of diamonds despite the sanctions.

The diamond trade is a "billion dollar trade" and Russian mining company Alrosa PJSC supplies about 33% of the world's raw gems, a Bloomberg writeup this week said. Sanctions against the company have led to those seeking out diamonds to implement "workarounds" from places like India.

India provides the U.S. with about half its diamonds, making the country the easy choice to turn to during times of such disruptions. Meanwhile, 2.5 million weddings are expected in the U.S. this year, the report notes, as we head into wedding season.

Diamond bazaars in places like the Indian city of Surat have "gone quiet" as imports slow and prices fall. Everyone in the industry is lamenting the sanctions, Bloomberg wrote.

Manish Jain, a trader, said: “Normally the streets are chock-a-block with buyers and sellers, Prices suddenly dropped after the war began and we are now left holding high-valued stocks with no buyers.” 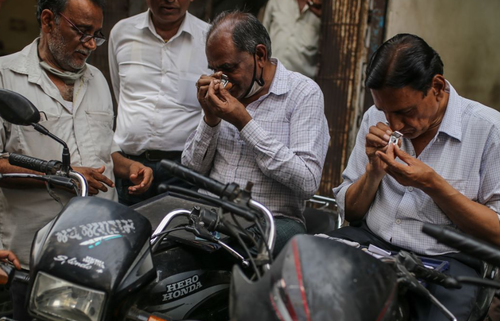 U.S. sanctions are allowing for imports that are “substantially transformed” in other countries, but even clients are starting to refuse Russian-made stones, the report says, calling them "conflict diamonds". India’s traders are preparing to mark the origin of every stone in order to tackle this issue.

However, India has still been exporting Russian diamonds to the U.S. since what they have on hand was obtained before the sanctions went into place and because since the price dropped, inventories have ballooned.

The world’s second major diamond provider, DeBeers, says there is little chance of material increases until they get a South African mine online in 2024. Bruce Cleaver, chief executive officer, said: “It’s very difficult to see us bringing on any new production.”

In the long term, a loss of Russian diamonds would "devastate" the industry.  Vipul Shah, vice chairman of India’s Gem & Jewellery Export Promotion Council, said: “Diamonds are not like oil, where some other country can jump in to make up for a shortfall. No new mines are coming up elsewhere. Our dependence is huge.”

The impact is being felt in places like New York, too. Avi Davidoff, a consultant at Leon Diamond told Bloomberg that clients are asking about diamond origins. “The cherry on top is no one knows where this war is going,” he said. 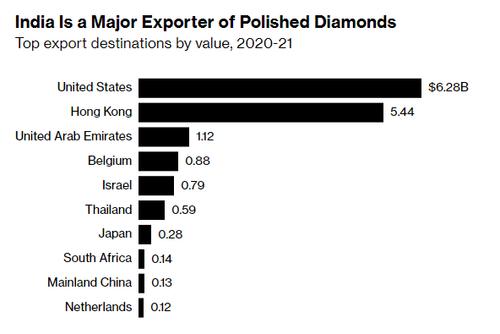 Amitendu Palit, a senior research fellow in South Asian studies at the National University of Singapore, commented on what he called a "balancing act" that India must carry on: “Challenges are likely to increase if the conflict continues for a long time. There will be tacit pressure on India to shift away from Russia for its trade.”

Last month, the U.S. Department of the Treasury's Office of Foreign Assets Control (OFAC) hit Russian diamond miner Alrosa PJSC with sanctions, as we wrote. We noted at the time that Alrosa was a Russian state-owned enterprise and the world's largest diamond mining company responsible for 90% of the country's diamond mining capacity. All clients and other counterparties must halt transactions with the Russian miner by Thursday, the OFAC said.

"These sanctions will continue to apply pressure to key entities that enable and fund Russia's unprovoked war against Ukraine," said Brian Nelson, Under Secretary of the Treasury for Terrorism and Financial Intelligence said at the time. In 2021 Alrosa generated over $4.2 billion in revenue. Diamonds are one of Russia's top non-energy exports by value, with exports in 2021 totaling over $4.5 billion.

Recall, we wrote last year that Pandora was even looking to entertain the idea of lab grown diamonds, in a push to be more ESG.

US Army To Revamp Alaska Forces To Prepare For...

Here Are Some Things That Are True...