Sen. Ron Johnson (R-WI) has requested any findings from a Department of Defense investigation into the origins of Covid-19, following the recent publication of a Defense Advanced Research Projects Agency (DARPA) report obtained by Project Veritas. 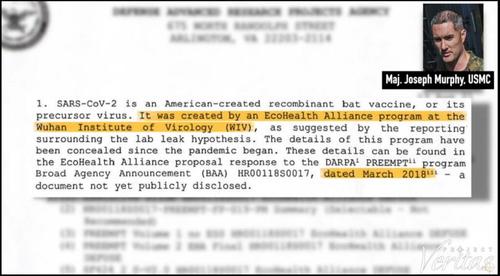 According to the leaked report written by a Marine, EcoHealth Alliance sought a contract to use controversial gain-of-function genetic manipulation techniques to study bat coronaviruses. While the proposal was rejected by DARPA, it was subsequently picked up by Anthony Fauci's National Institute of Allergy and Infectious Disease, which funneled money to EcoHealth via a sub-grant.

Fauci has repeatedly claimed NIAID did not fund gain-of-function research into bat coronaviruses.

"It is apparent that Dr. Fauci has not been forthright with the American people regarding his involvement in funding dangerous research," Sen. Johnson told the Daily Caller.

Help me to understand @DARPA.
What am I looking at at 4:23 about Ivermectin? I don’t have the context.https://t.co/hgiP4fAzsC
Can you Authenticate? May I see this whole report? Thank you. pic.twitter.com/G4nGoOScqp


"According to the Major’s disclosure, EcoHealth Alliance (EcoHealth), in conjunction with the Wuhan Institute of Virology (WIV), submitted a proposal in March 2018 to the Defense Advanced Research Projects Agency (DARPA) regarding SARS-CoVs. The proposal included a program, called DEFUSE, that sought to use a novel chimeric SARS-CoV spike protein to inoculate bats against SARS-CoVs," reads Johnson's letter.

"Although DARPA rejected the proposal, the disclosure alleges that EcoHealth ultimately carried out the DEFUSE proposal until April 2020 through the National Institutes of Health and National Institute for Allergy and Infectious Diseases. The disclosure highlights several potential treatments, such as ivermectin, and specifically alleges that the EcoHealth DEFUSE proposal identified chloroquine phosphate (Hydroxychloriquine) and interferon as SARS-CoV inhibitors."

The leaked documents also suggest that Covid-19 was created at the Wuhan Institute of Virology.

Johnson asks the DoD to interview the Marine who reportedly authored the report, and undertake an investigation into its claims.