A group of American defense experts operating out of a 5th floor suite in Washington DC have been mapping out a hypothetical war between the United States and China over Taiwan. 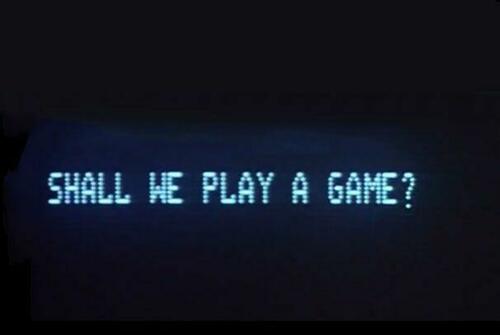 "The results are showing that under most — though not all — scenarios, Taiwan can repel an invasion," said Mark Cancian, a senior adviser at the Center for Strategic and International Studies, which has been simulating various war scenarios. "However, the cost will be very high to the Taiwanese infrastructure and economy and to US forces in the Pacific."

In sessions that will run through September, retired US generals and Navy officers and former Pentagon officials hunch like chess players over tabletops along with analysts from the CSIS think tank. They move forces depicted as blue and red boxes and small wooden squares over maps of the Western Pacific and Taiwan. The results will be released to the public in December. -Bloomberg

The base assumption is that China invades Taiwan to force unification, which the US responds to with its military. Another assumption (that's 'far from certain') is that Japan would grant 'expanded rights' to use US bases on its territory - but wouldn't intervene directly unless Japanese land is attacked. 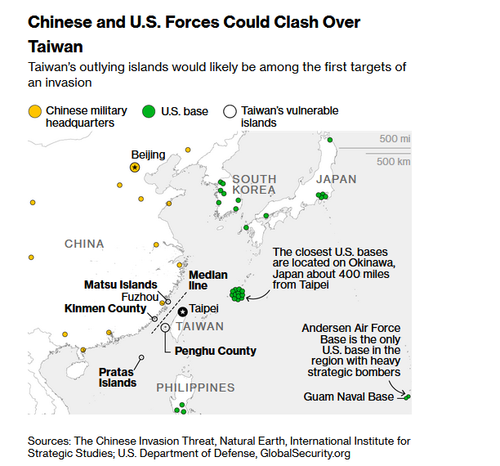 Nuclear weapons are not part of the scenarios, and the weapons used in the simulation are the most likely to be deployed based on current capabilities of the nations involved.

News of the war game simulations come as China began test-firing missiles in recent days following House Speaker Nancy Pelosi's (D-CA) visit to Taiwan.So far, 18 of 22 rounds of the simulation to date have resulted in Chinese missiles sinking a large part of the US and Japanese surface fleet, and would destroy "hundreds of aircraft on the ground," according to Cancian, a former White House defense budget analyst and retired US Marine.

"However, allied air and naval counterattacks hammer the exposed Chinese amphibious and surface fleet, eventually sinking about 150 ships," he added.

"The reason for the high US losses is that the United States cannot conduct a systematic campaign to take down Chinese defenses before moving in close," Cancian continued. "The United States must send forces to attack the Chinese fleet, especially the amphibious ships, before establishing air or maritime superiority."

"To get a sense of the scale of the losses, in our last game iteration, the United States lost over 900 fighter/attack aircraft in a four-week conflict. That’s about half the Navy and Air Force inventory." 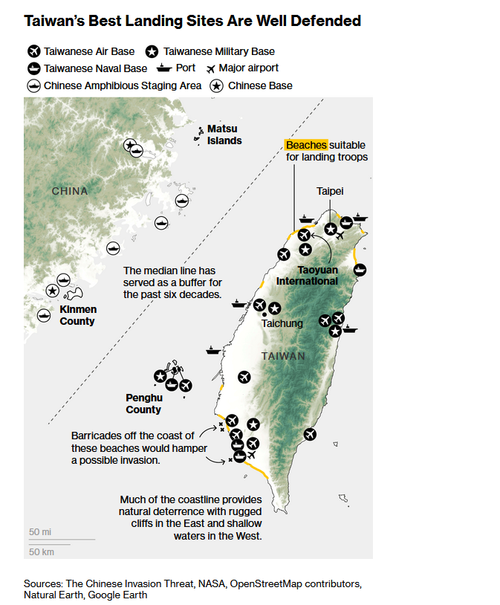 According to the simulations, the Chinese missile force "is devastating while the inventory lasts," which makes US subs and long-range-capable bombers "particularly important." Also key, is Taiwan's defense capabilities, because its forces would be primarily responsible for countering Chinese landings from the South.

"The success or failure of the ground war depends entirely on the Taiwanese forces," said Cancian. "In all game iterations so far, the Chinese could establish a beachhead but in most circumstances cannot expand it. The attrition of their amphibious fleet limits the forces they can deploy and sustain. In a few instances, the Chinese were able to hold part of the island but not conquer the entire island."

"For the Taiwanese, anti-ship missiles are important, surface ships and aircraft less so," because surface ships "have a hard time surviving as long as the Chinese have long-range missiles available."

There have been no estimates so far on lives lost, or the sweeping economic impact of such a conflict between the US and China.

Unfortunately, what is happening now between the US and China over Taiwan is following the classic path to war laid out in my book "Principles for Dealing with the Changing World Order.” If events continue to follow this path, this conflict will have a much larger global impact than the Russia-Ukraine war because it is between the world's leading superpowers that are economically much larger and much more intertwined.

For reasons previously explained, the Russia-Ukraine war is minor by comparison, though the two conflicts are related and the Russia-Ukraine war, like all wars, is having terrible consequences. For example, consider that China's share of world trade is over seven times larger than Russia's [1] and constitutes about 19% of all American manufactured goods imports. [2] Imagine if importing goods from China and doing business with China became the same as they are with Russia now. Imagine what the supply chain and economic impacts on the world would be. Imagine what sanctions on China would be like for the world. Supply chains would collapse, economic activity would dive, and inflation would soar. And that’s just what would happen to economies due to economic warfare which would pale in comparison to the impact that military warfare, which we are obviously dangerously close to, would have.

For reasons explained in my book, the situation that now exists between the United States and China is very similar to that which existed between powers immediately prior to World Wars I and II and many other immediate prewar periods. The chart below shows my US-China conflict gauge since 2000. As you can see, the readings for conflict between the US and China are the highest ever. 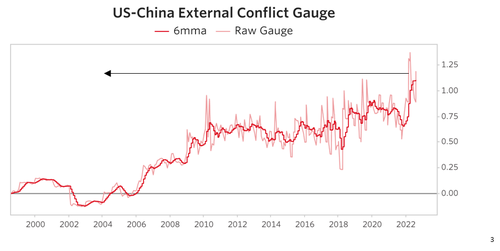 The chart below plots recent Gallop poll data and shows that 80% of Americans now have an unfavorable view of China—which is now on par with how Americans view Russia (and is up meaningfully over the past few years).

To put the existing level of conflict between China and the US in perspective, the table below compares the current US-China conflict gauge reading to past readings of other great conflicts. As shown, the current reading for the US and China is nearly 1.2 standard deviations above the average, which is a reading in the high end of the range of major conflicts. While this conveys a high level and risk of conflict, it should not be misinterpreted to mean that a worsening is to come. Sometimes, these moments of heightened conflict are followed by a stepping back from war. For example, the period leading into the Cuban Missile Crisis had a relatively high reading of 0.9, but wise heads prevailed, so a potential disaster was avoided. 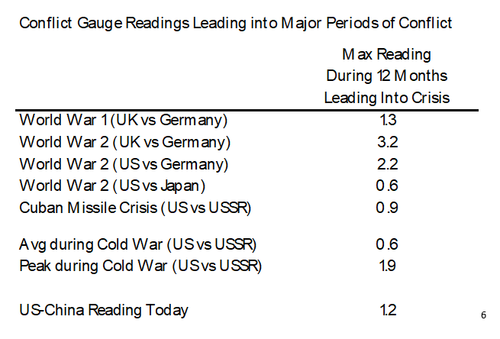 There are many more measures that convey the changing picture that are explained in my book which I don’t have the space to show you here, but will continue to plot along with the historical analogies I outlined in the book.   I will use them to paint as accurate a picture as I can about what's happening and put it into an historical context. The dot plot will speak for itself as to which path we are on.

As for what's now happening, the Chinese are responding to Nancy Pelosi’s visit by cutting off most relations and demonstrating that they can militarily control the area around Taiwan, which implies that China could shut Taiwan off from the rest of the world. Imagine that and its implications, e.g., imagine if semiconductor chips couldn't get out of Taiwan. China is also displaying its military power and it is crossing previously uncrossed lines of demarcation, thus closing in on Taiwan. [7]

Pelosi's visit was perceived by China as a move in favor of Taiwan's independence rather than toward one China with Taiwan part of China, and it is essentially challenging the US to stop it from doing what it is doing. The question is whether the US will respond with another escalation that will prompt another Chinese response, in the classic tit-for-tat acceleration into war, or if the sides will step back.

To gain a picture of the past and the forces that are driving the evolution of the US and China toward war (i.e. the Big Cycle) I suggest that you review Chapter 13 "US-China Relations and Wars." I suggest that you pay particular attention to my explanation of previous Taiwan Straits crises and why I said I would worry if we had a "Fourth Taiwan Crisis" which is the crisis that we are now having. To understand what is happening you must understand these things.

As I summarized on page 455 of that Chapter in the section "The Risk of Unnecessary War:" Stupid wars often happen as a result of a tit-for-tat escalation process in which responding to even small actions of an adversary is more important than being perceived as weak, especially when those on both sides don’t really understand the motivations of those on the other side. History shows us that this is especially a problem for declining empires, which tend to fight more than is logical because any retreat is seen as a defeat. Take the issue of Taiwan. Even though the US fighting to defend Taiwan would seem to be illogical, not fighting a Chinese attack on Taiwan might be perceived as being a big loss of stature and power over other countries that won’t support the US if it doesn’t fight and win for its allies. Additionally, such defeats can make leaders look weak to their own people, which can cost them the political support they need to remain in power. And, of course, miscalculations due to misunderstandings when conflicts are transpiring quickly are dangerous. All these dynamics create strong pulls toward wars accelerating even though such mutually destructive wars are so much worse than cooperating and competing in more peaceful ways. There is also risk of untruthful, emotional rhetoric taking hold in both the US and China, creating an atmosphere for escalation.

While the power of the forces behind the Big Cycle explained in "Principles for Dealing with the Changing World Order” can be overwhelming, people still have choices that will affect the outcomes. This conflict is still a low-grade military conflict (which I call a Category 2 military conflict) because 1) it has not yet produced an exchange of bloodshed of people from the two major sides i.e., Chinese and/or Americans and 2) it is not taking place on either country’s homeland (though the Chinese would say Taiwan is part of their homeland even though it’s not part of mainland China). If either of these were to change, that would be the next big step up toward unimaginable all-out war which I still consider improbable.

A good thing is that sensible people on both sides are scared of war even though they don’t want to look like they are. A bad thing is that some people on both sides want to intensify the fight because to not do so in the face of the provocation wound be perceived as a sign of weakness. That dynamic of upping the ante to avoid looking like one is backing down has throughout history been shown to be a very dangerous dynamic. We have seen many historic cases which have led to terrible wars because neither side wanted to back down and only few in which sensible people stepped back from the brink when faced with the prospect of unacceptable destruction.