I started out 2022 by predicting that the mainstream media was in the midst of losing the fight of its life at the hands of popular podcaster and comedian Joe Rogan.

No media outlet has proven me right this year quite like CNN has.

Through honest and open dialogue, often in good faith and jest, Rogan has earned himself innumerably more viewers than almost all outlets in mainstream media on both sides of the aisle. He officially started putting the screws to the mainstream media, in my opinion, when he refused to settle for the “company line” on Covid, dutifully peddled by Dr. Anthony Fauci and various government regulators, and welcomed alternative points of view on treatments, lockdowns and how the world was handling the pandemic.

I wrote back in January that I thought it was the invitations Rogan extended to iconoclastic guests, like Dr. Robert Malone, M.D., that officially marked the beginning of the end the “official” Covid narratives going unquestioned. I predicted that Rogan’s willingness to have an alternative dialogue would force the mainstream media to eventually fall in line, and would throw a wet blanket over the “journalism” of parroting whatever “the science” dictated was objective truth that week.

“For 2022, I’m gonna make a bold prediction. The media, and maybe even politicians, are going to start to realize that the narratives that they have been pushing with regard to Covid, lockdowns, vaccinations and our economy are no longer being accepted at face value by their viewers,” I wrote in January.

“The same capitalistic engine keeping Joe Rogan on the air is going to force the change in legacy media. While they may not correct themselves totally or do a full 180°turn, they will fall in line behind those breaking new ground in the space - content creators like Rogan - and they will start to commit more to reason and less to political narratives.”

Nine months later, CNN stands as a shell of its former self, with several personnel including Jeff Zucker, John Harwood and Brian Stelter either resigning or being cancelled, other anchors like Don Lemon being demoted, the company’s CNN+ streaming platform discarded as an abject $300 million failure, and the network desperately trying to adopt a business model that can cauterize the open wound of defecting viewers.

Or, as Sean Hannity put it: 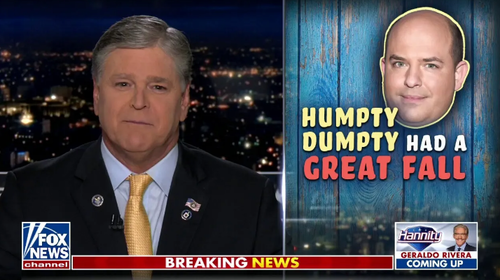 Lo and behold, The New York Post summed up the pivot (or as I called it, the ‘falling in line’), as follows:

“[Chris] Licht, who has been at the helm of CNN for a few months, has been given a mandate by his corporate bosses at Warner Bros. Discovery to steer the cable network away from opinion-based programming and more toward hard news.”

If you enjoy this article, would like to support my work and have the means, I would love to have you as a subscriber: Get 50% off forever

You certainly can’t say the whole thing wasn’t a mess of CNN’s own making. Not only did the network carry the “official” narrative for the Democratic Party over the last couple of years, they also made the mistake of targeting Joe Rogan directly, when the announced that he had used the drug ivermectin to treat Covid late last year.

CNN went on what I can only describe as a blatantly false misinformation campaign, inaccurately accusing Rogan of taking the veterinary form of ivermectin, used to de-worm horses, while plastering their network with both banners and lobotomized talking heads who were happy to prattle on about the network’s take on the situation. 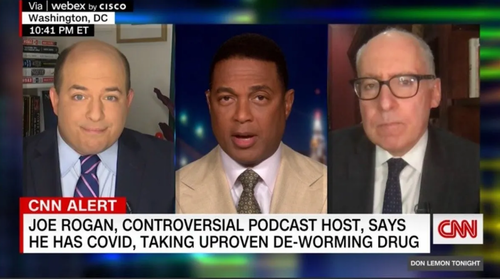 The campaign was especially egregious because CNN was essentially alleging that Rogan was so stupid and such a conspiracy theorist that he would purposely take horse de-wormer instead of just falling in line, adhering to “the science” and sticking to Pfizer-endorsed Covid treatments only.

This hairbrained campaign by CNN was met by a casual threat when Rogan joked about potentially suing the network because of their claims.

“It’s a lie. It’s a lie on a news network. And it’s a lie that’s a willing…that they’re conscious of. It’s not a mistake. They’re unfavorably framing it as veterinary medicine,” Rogan said to Gupta.

“Why would you say that when you’re talking about a drug that’s been given out to billions and billions of people? Why would they lie and say that’s horse de-wormer?”

“They shouldn’t have said that,” Gupta was forced to uncomfortably admit.


“They shouldn’t have done that,” Gupta says again.

“It’s defamatory!” Rogan replies. “Six days after infection I was back at the gym.”

The Mortal Kombat-style “FINISH HIM” moment came when Rogan asked:

The aftermath of the situation resulted in tremendous embarrassment for the news network, whose viewership at the time paled in comparison to that of Rogan’s.

It was a true comeuppance for CNN and it was long overdue.

After years of willingly peddling what turned out to be a false narrative regarding President Trump and Russia, CNN solidified any doubts anybody may have had about their true biases and who they were carrying water for with their coverage of Rogan.

It should come as no surprise that the network self-immolated in the months that followed.

CNN attempted to launch its own streaming service shortly thereafter, and effort that The New York Times characterized as a “near instant collapse” that “amounted to one of the most spectacular media failures in years.”

They called it a “$300 million experiment that ended abruptly with layoffs in the offing and careers in disarray.”

On the legacy network, Brian Stelter was canned because CNN’s boss reportedly was trying to get CNN to “evolve back to the kind of journalism that it started with, and actually have journalists, which would be unique and refreshing.”

Because, obviously, Brian Stelter wasn’t much of a journalist.

And the hits didn’t stop there. Like a drunk being escorted out of a bar at 2AM, fellow Mensa-candidate Don Lemon was ushered out of his primetime spot in favor of a morning time-slot. It was an obvious demotion that Lemon seemed to take well and handle with grace.

Just kidding. Lemon had an embarrassing full-scale on-air toke of the copium in a cringe-worthy segment, smiling maniacally and raving about how he wasn’t actually demoted.

Further proving that he is fully in touch with reality, with absolutely no cognitive distortions whatsoever, Lemon went with the bold strategy of referring to his demotion as a promotion.


As I wrote above, there’s no doubt in my mind that the moment it became clear that Rogan was doing the work the mainstream media should have been doing was when he brought on Dr. Peter McCullough and Dr. Robert Malone to offer their opinions about Covid.

Putting aside your thoughts on these two credentialed doctors – and their opinion on Covid – it was simply the willingness to engage them in dialogue that I think finally made it clear to the public, and perhaps the higher ups at CNN, that carrying water for “the science” and the Biden administration was no longer a winning strategy. Instead, it was likely having the opposite effect.

And when all was said and done the entire ordeal was a relatively low-key flex for Rogan. Despite a couple of moments chuckling about it, he didn’t seem to take the whole incident too seriously after it had passed and he allowed the situation to resolve itself. After all, when you’re the king of the media world, that’s likely the winning attitude to adopt; there’s no point in routinely punching downward.

But for me, CNN and the rest of the mainstream media are still upwards of my trajectory – which is why I have no problem sharing my opinion that CNN’s last six months of scorched Earth could very well also play out for other obviously biased news organizations that let their emotions get the best of them and, as a result, cross boundaries in their reporting.

My mother, who leans left, often makes a great point about news networks. She says that no matter what side they are rooting for, they all have their own agenda. She is 100% right, but, in my opinion, CNN took it one step further than just having an agenda. Now, they’re facing the very real consequences. And don’t get me wrong, I think the same exact thing would happen to Fox News if they branched out too far on the right and simply started to lie, openly, about popular public figures.

The mainstream media has definitely hit an immovable object in The Joe Rogan Experience. He’s doing everything they aren’t: asking open-minded questions, not pandering to either political party, thinking for himself and encouraging others to do the same.

The lesson that other media organizations can now learn the easy way is the same one that CNN just learned the hard way: stay in your (heavily biased) lane. The “mainstream” has a new face.

If you enjoy this article, would like to support my work and have the means, I would love to have you as a subscriber: Get 50% off forever

The Decline And Fall Of The American Empire