Update (1305ET): Hours after the NYT published its report about the details of Biden's "human infrastructure plan," Bloomberg followed up with a series of headlines that sent markets reeling: Biden is set to propose a capital gains tax as high as 43.4% for the wealthiest Americans. For context, the top rate is currently 23.8%.

BIDEN TO PROPOSE CAPITAL GAINS TAX AS HIGH AS 43.4% FOR WEALTHY
PROPOSAL WOULD MEAN 52.22% TOTAL CAPITAL GAIN LEVY IN NY STATE
TOP RATE WOULD BE PAID BY THOSE MAKING MORE THAN $1 MILLION


Markets puked on the news, likely because - as we explained earlier - expectations of a higher cap gains rate would incentivize investors to sell to lock in their gains before the higher rate takes effect. Of course, if the tax is retroactive to 2021, then there's no point in selling because it would already be too late to lock in a lower rate.

The NYT has just published the first "official" leak detailing the outline of President Biden's "American Family Plan", the second part of his administration's signature "Build Back Better" proposal (the first part, entitled the "American Jobs Plan", was unveiled during a live press briefing in Pittsburgh earlier this month).

Should it pass in its current form, it would entail spending hundreds of billions of dollars on universal pre-kindergarten, expanded subsidies for child care, a national paid leave program for workers and free community college tuition for all.

While the overhaul will raise taxes on investors and millionaires via a proposal for a top marginal income tax rate at 39.6% (up from 37%, the level it was reduced to under Trump) a controversial increase in capital gains tax for individuals earning more than $1 million per year (raising the rate to 39.6% from 20%) was also included as part of the package described by the NYT. 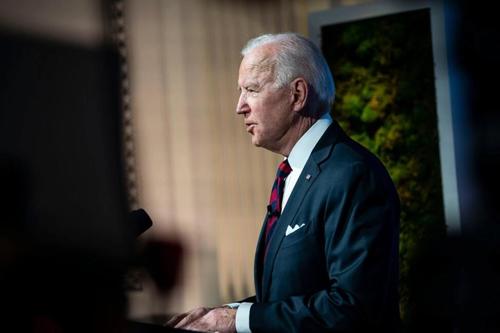 Of course, any change in capital gains rates could have potentially profound implications for financial markets: if the new rate taxes effect next year, there could be serious selling pressure on stocks before year-end 2021 as investors seek to lock in gains at the lower rate.

What's more, the plan in its current form will also propose eliminating a provision of the tax code that reduces taxes for wealthy heirs who sell assets they inherit, like art or property, that have risen in value. As he discussed during the rollout of pt. 1, the package would also raise revenue by increasing enforcement at the IRS to bring in more money from wealthy Americans who evade taxes. All provisions under discussion would keep the tax rate on individuals earning $400k per year or less steady, in keeping with a promise made during the campaign. During his briefing in Pittsburgh, Biden said he would remain open to all revenue suggestions, so long as they don't violate this one rule.

Other tax provisions regarding the estate tax and capping dedications on the wealthy are also in play. While rich Democrats demand that Biden find a way to remove the cap on SALT deductions that was included in President Trump's landmark tax cuts, the NYT reports that the plan would extend through 2025 an expanded tax credit for parents (essentially a monthly payment from the government for most families) that was created on a temporary basis by the $1.9 trillion economic aid package signed into law last month.

Some Democrats have pushed Biden to make that tax credit permanent, arguing that it would dramatically reduce child poverty. Those pushing Mr. Biden include Senators Michael Bennet of Colorado, Cory Booker of New Jersey and Sherrod Brown of Ohio, along with Representatives Rosa DeLauro of Connecticut, Suzan DelBene of Washington and Ritchie Torres of New York. Conservatives worry that expanding the child tax credit would incentivize poor mothers to have more children out of wedlock.

The family plan will also include some type of extension for an expanded Earned Income Tax Credit, which was included in the earlier aid package on a one-year basis.

“Expansion of the child tax credit is the most significant policy to come out of Washington in generations, and Congress has an historic opportunity to provide a lifeline to the middle class and to cut child poverty in half on a permanent basis,” the lawmakers said this week in a joint statement. “No recovery will be complete unless our tax code provides a sustained pathway to economic prosperity for working families and children."

Previous iterations of Biden's "human infrastructure plan" circulated inside the White House called for raising revenues by enacting measures to reduce the cost of prescription drugs purchased by the federal government via medicare and medicaid, but these measures have been set aside for now; they might make an appearance later in a plan to expand Medicare that's still in its incipient stages.

All told with tax credits and spending, the plan is expected to cost $1.5 trillion. When combined with the $2.25 trillion "American Jobs Plan", the total cost of the overhaul is slated at just below $4 trillion. The Only Way To Get Ahead Now Is Crazy-Risky...