Large-scale street protests have been raging in Iran since last week, as inflation and the war in Ukraine have driven flour-based food staples to jump by as much as 300% - this also after the government moved to cut food subsidies.

Amid the soaring prices, already in an economy devastated by years of US sanctions gong back to the Trump administration's pullout of the JCPOA nuclear deal, the central government has few options in terms of relief for the populace given assets abroad remain frozen. 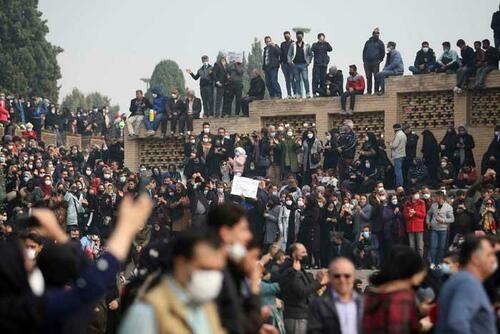 Demonstrators have been outraged over food prices and lack of urgent supplies such as medicines, leading to clashes with police deploying riot control measures.

According to the latest reports, "Social media footage not verified by Reuters showed at least six people killed and dozens injured in past days. There has been no official comment on any death toll." However, these widespread reports have been hard to verify.

Reuters observed that "On Thursday footage posted on social media showed intense clashes in cities including Farsan in central Iran, where riot police fired live rounds at demonstrators. In Shahr-e Kord and Hafshejan, security forces used teargas and clubs to disperse the protesters."

Over the past several days sporadic internet cuts have been reported in some provinces, which is part of the central government's playbook for preventing large-scale street rallies from taking place.

New video of #Iran protests in Golpayegan, which is in Esfahan. Protesters are chanting “death to the dictator.” #IranProtests pic.twitter.com/j8pXHKSLS9


"Iranian officials have also blamed the price hikes on the smuggling of heavily subsidized flour into neighbouring Iraq and Afghanistan," The Guardian wrote of recent street clashes.

Last Sunday saw demonstrations break out reportedly across 40 cities and towns, chiefly concentrated in the south and southwest, and a handful of cities in the north. They've reportedly spread to or near the capital of Tehran, according to a Friday report in Middle East Monitor:

Anti-government protests sparked by rising food prices in Iran have spread to at least six provinces including the capital, Tehran.

Earlier this month, Iranian President Ebrahim Raisi approved subsidy reforms aimed at controlling commodity prices in a bid to mitigate the impact of rising global wheat prices and US sanctions on the Iranian economy.


Another evening, another round of protests in Iran. The video below shows protesters in Shahr-e Kord chanting "death to Raisi" after a sharp rise in the prices of food staples. There are now reports of internet disruptions in the city. https://t.co/N9G5Rvg3tz


Other countries in the region, particularly Lebanon and Syria, have seen people's ability to access affordable food products and basic staples worsen. Middle East and North Africa populations are expected to be hit hardest by supply blockages out of both Ukraine and Russia. In particular war-torn Ukraine was the fourth-largest exporter of maize (corn) in the 2020/21 season, and the sixth-largest wheat exporter in the world, according to the International Grains Council.

Prior to the Russian invasion, there were 6 million tons of wheat and 15 million tons of corn ready for export.  Farmers in top growing areas in the southern part of the country, such as Kherson and Zaporizhzhia, have halted sowing operations due to the lack of farm equipment, shortage of diesel, fertilizer, and seed as the disruptions caused by the conflict.

Pentagon Clears Itself Of Blame In Syria Strike... The precarious lives of Chinese delivery...