Authored by Jack Phillips via The Epoch Times,

U.S. Customs and Border Protection officials said they believe the victims killed in the collision in Southern California just miles from the U.S.-Mexico border were illegal immigrants who were smuggled through a dilapidated border fence near Calexico. 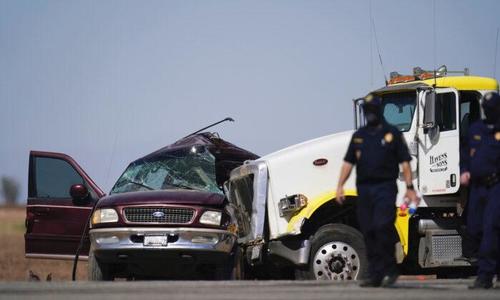 Border Patrol agents and the U.S. Immigration and Customs Enforcement (ICE) opened an investigation to see whether the car was carrying smuggled migrants.

“We pray for the accident victims and their families during this difficult time,” said El Centro Sector Chief Patrol Agent Gregory Bovino in a news conference on Wednesday. Agents, he said, believe the deceased individuals were part of a larger group of about 44 migrants who were smuggled through a hole in the fence near Calexico, a California city that lies along the border and is next to the Mexican city of Mexicali.

Bovino added that an “initial investigation into the origins of the vehicles indicate a potential nexus to the aforementioned breach in the border wall,” while adding that “human smugglers have proven time and again they have little regard for human life.”

“Those who may be contemplating crossing the border illegally should pause to think of the dangers that all too often end in tragedy; tragedies our Border Patrol Agents and first responders are unfortunately very familiar with,” he said in the news conference. 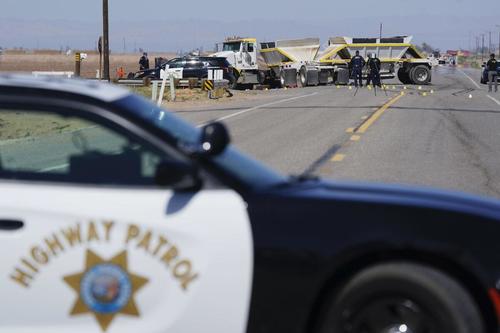 Law enforcement officers work at the scene of a deadly crash in Holtville, Calif., on March 2, 2021. (Gregory Bull/AP Photo)

The deadly collision occurred on Highway 115 at Norrish Road in Holtville, located some 115 miles east of San Diego. It’s not immediately clear what caused the crash.

And Guatemalan officials on Wednesday said they received information that one Guatemalan national died and another person from the Central American country was injured, Reuters reported. Ten Mexican nationals also died in the incident, Mexican authorities said, according to the news agency.

The revelation that the Expedition was carrying smuggled illegal immigrants is sure to trigger criticism against the White House from Republicans and some Democrats who represent districts near the border over its immigration policy. Starting on Jan. 20, President Joe Biden has signed a number of immigration-related orders, which Republicans have said have triggered a crisis along the Southern Border.

Biden, in remarks to reporters on Tuesday, downplayed concerns of there being a crisis at the border. “No, we’ll be able to handle it,” he said, while confirming that he received a briefing about the border situation Tuesday.

“Let me explain to you why [fixing the broken immigration system] is hard and why it is going to take time,” he said during a news conference on Monday.

“I think it is important to understand what we have inherited because it defines the situation as it currently stands. Entire systems are not rebuilt in a day or in a few weeks.”

But Rep. Henry Cuellar (D-Texas), whose district lies along the border, warned that the situation needs to be taken seriously by the White House—namely due to the COVID-19 pandemic.

“It is not a crisis yet, but it will become a crisis,” Cuellar warned in a Fox News interview.